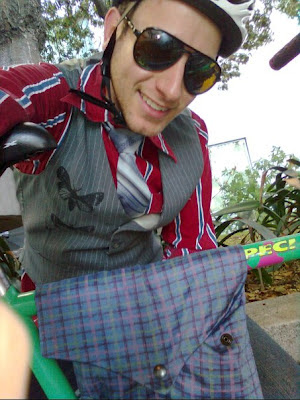 Name: Adam Dubinsky, aka Duby Occupation: VP of San Francisco Yellow Bike Project, lawyer Raison d'être: Is there one? I figure I am here, so I'd might as well find some good and useful ways to pass the time. That is my way of the ninja. (But given that: Getting more people on more bikes on the streets of San Francisco. Cycling has been such a wonderful addition to my life that I am motivated by increasing access and reducing barriers to cycling so that more people can enjoy its benefits. Same re access and barriers to legal knowledge and empowerment.) 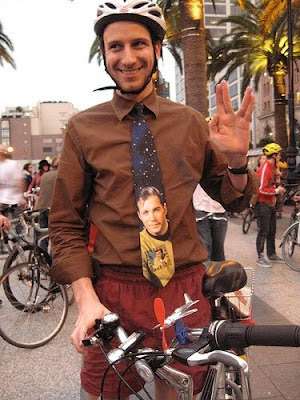 Hometown: N/A. I moved around too much growing up. Best approximation is Worcester, MA. Current city/Neighborhood: Western Addition, San Francisco Favorite city to ride a bike in in the world: San Francisco! Describe your personal style: "Oh dear." Or "Goofy Goodwill Dapper?" I swing wildly between the extremes of relying on a single, practical, bike friendly outfit to playing dress up with an absurd pastiche of whatever I can find in my closet. But I do love ties and vests (though it's hard to find vests that are both slim and long enough for my lanky, stickly figure), stripes, and fun socks--and fall fashion in general. And I'm almost always wearing my custom "Duby" Nike sneakers. I tend to get infatuated with certain pieces or outfits and then wear he hell out of them for months. I've been so smitten with my Levi's Commuters lately that these days you're most likely to spot me in my Commuter Canadian Tuxedo. Whatever I'm wearing, I try to make sure it's an outfit I'm ready to dance in. In the words of Flynt Flossy, "Did I mention I like to dance?" Helmet or no helmet: Helmet. I hate riding without one. Plus I think my Bern is damn gorgeous! 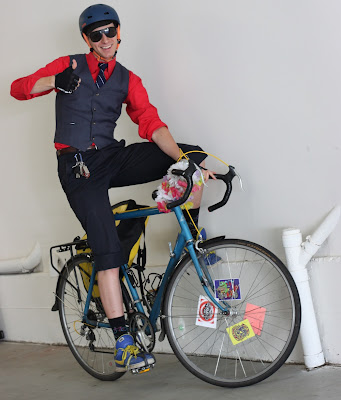 Type of bike: Blue 63 cm 1984 Cannondale ST 1400 roadie named Aarigaa, which is Inupiaq for Wow!/Wonderful!/Good! After moving to SF from rural Alaska in 2008, my first adult bike and entry into urban cycling was a Trek hybrid named Kiita, which is Inupiaq for "Let's go!" Describe what you like best about your bike(s): That it gave me, for the first time in my life, the hint of a butt. (Just kidding. Sort of. Not really.) 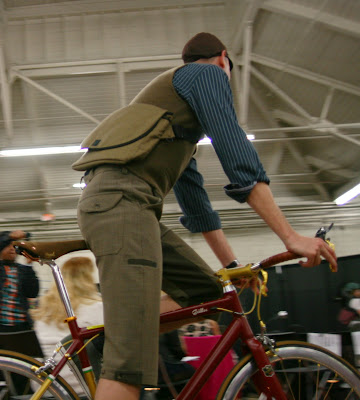 Riding a bike has been so wonderful and empowering for me that I don't know that I can narrow down to a singular best. Getting anywhere in the city easily and within 45 minutes? Getting great exercise just by going places? (That one is a big one for me since I have a congenital heart defect and had open heart surgery about a year before moving to San Francisco.) Meeting a wonderful community of diverse and passionate people who have become dear friends and inspirations! Describe your urban cycling experience: If by experience you mean my urban cycling CV, I started when I moved to SF in 2008. I was so terrified to be riding on city roads that the first time I went out on my bike to meet a friend, I was actually shaking. But he showed me basic urban cycling technique and etiquette on a ride through the Mission, along the wiggle, through the park, to Ocean Beach, and I was hooked. It took me a little while to get over being nervous and hesitant around cars, but I began commuting from Glen Park (where I lived at the time) to SOMA every day for work. Riding a bike turned out to be the quickest and most reliable way to get from point A to point B in SF, so I found myself biking more and more for all sorts of errands and events. I was initially reluctant to consider myself a part of the "cycling community." I was an impostor--I just happened to be a guy who rode a bike. Calitexican from Change Your Life, Ride A Bike became my first bikey friend, and she's the one who introduced me to the lovable, loving, skilled, talented, diverse, passionate, inspiring, growing group of misfits in our little corner of the bike community. From there, little by little, bit by bit, I started getting more involved. At this point, my bike is my primary interface with the Bay Area, not just in terms of transport, but also fitness, recreation, and social connection. Favorite time and/or place to ride: I'm not one for favorites--how can I rank in preference all of the wonderful rides, whether biking to shuck-your-own oysters in Drake's Bay, or up Mount Diablo, or up Twin Peaks, or along the Embarcadero, or even the simple joy of riding home with panniers full of groceries. They exist in relation to each other and are all special to me, like the colors across a spectrum. 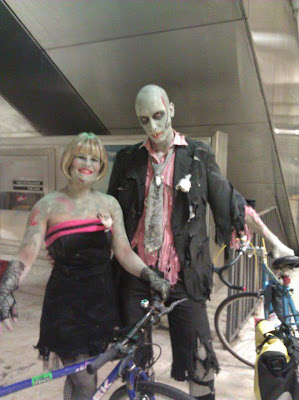 That said, Wednesday night ButterLap (an 18-ish mile group loop around the city, starting at the Ferry Building) is particularly dear to me. It's moderately hilly, so if you do it regularly enough, it's like training--you're well equipped to handle longer rides outside of San Francisco, and tackling hills on your rides in San Francisco is much easier. 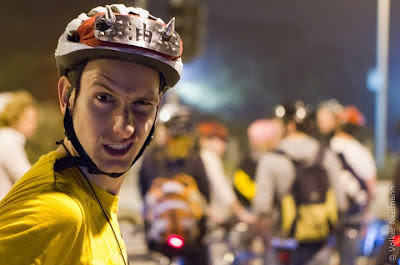 And while Masonic St. is a horrible, dangerous mess for cyclists, coasting down Bush St. from the Masonic intersection late at night is such unadulterated joy. The lights are timed just right! Tell us a funny story that happened to you on your bike: This didn't happen to me while I was on my bike, but working on my bike. To be honest, it's just the fact that I was working on my bike. I'm the vice president of an infant community bike shop, but I only changed my first bike tire this December! I'm a total bike maintenance novice! To put it in another way, I'm not only a vice president; I'm also a client. You never know where life will take you. I'm grateful for the chance to build up my skills with San Francisco Yellow Bike Project, and I hope we help a lot of people do the same. Where will your bike take you in 2012: Almost everywhere I go. Hopefully to an operational San Francisco Yellow Bike Project shop! I'd love to bike tour Ukraine (the Dubinsky/Schattner homeland), but that will be another year. 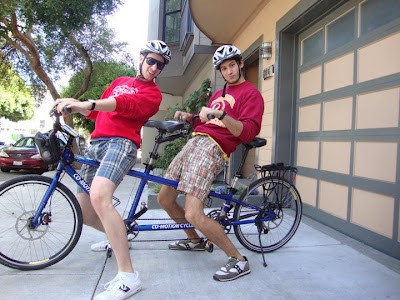 Tell me about your involvement in San Francisco Yellow Bike Project: Nathan Woody and Mary Kay Chin, two of my dear friends, approached me in the fall about helping them get SFYBP rolling. As noted, I'm just starting to learn the ins and outs of bike maintenance, so I thought it would be a great way to continue to develop while also giving back--both to the bike community that has given me so much, and to the community as a whole. What better project than to help share bicycles with more people? And who wouldn't jump at the chance to work with Woody and Mary Kay? On paper, I'm a Vice President, the Secretary, and Director on the Board, but at this early stage in development, it's all hands on deck. And it has been amazing. We've gotten such wonderful and passionate support from our friends and the bike community. There are a lot of exciting developments in the works right now for SFYBP, so stay tuned. We can't wait to get more people on more bikes. So come be a part! 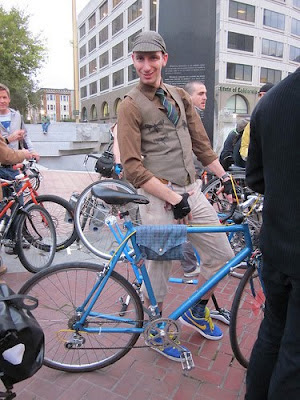 Vélo Vogue tip of the day: Learn to do basic maintenance and repairs on your bike. Believe me--I know it can be intimidating! I just started! But it's so much easier than you think, and you'll end up saving a lot of time and money (and heartache). You'll build an even closer and more rewarding relationship with your bike. Ask some knowledgeable friends to take you through it, watch the instructional videos on youtube, or find a local community bike shop, like Spokeland, The Bike Kitchen, or San Francisco Yellow Bike Project.
documenté par Kristin Tieche à 07:30