Cyclist hit by car in SOMA and killed, no one notices 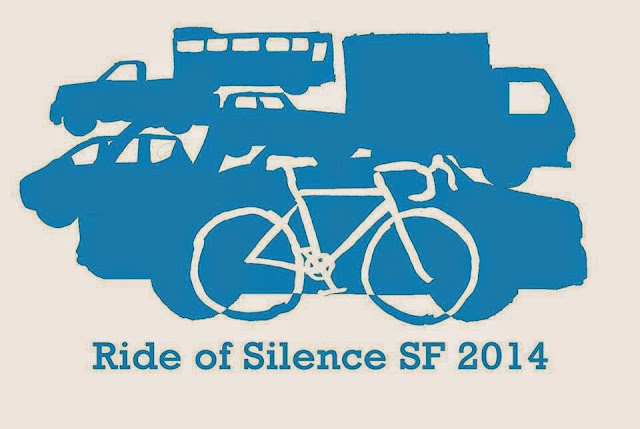 Over a month ago a cyclist was killed after being struck by a car at Folsom and 13th/Erie. It wasn’t reported in the media and went virtually unnoticed until recently. After some digging around, we now know the name and age of the victim, 55 year old Harold Swaggard. Little else is known about the fatal collision, except that he may have been riding on the wrong side of the road.

On Sunday April 20, SFGate published an article titled “Keep an Eye Out When on Foot in SF”, urging pedestrians and cyclists, (and motorists), to be aware when using the roads in our city, in light of 7 pedestrian and 1 bicycling fatalities on record so far in 2014. The author cited 21 pedestrian and 4 cycling deaths last year.

I keep track of bicycling deaths in San Francisco. It’s part of my job as co-organizer for the San Francisco Ride of Silence, an annual bike ride to honor those that have lost their lives while riding on our streets. Until reading Sunday’s article, however, I hadn’t heard someone had died biking in San Francisco this year.

How could this be? I wondered, as I followed up with Heather Knight, the author of the article. She confirmed that according to SFPD Commander Mikail Ali, indeed a male bicyclist was hit by a car and killed at Folsom and 13th Streets on March 19th.

I wasn’t the only one who found the previously unreported death intriguing and confusing. Patrick Traughber started a Twitter dialogue with Ms. Knight, and three days later a name was released. Traughber further reported on his blog, Improving our cities, that March 19th, 2014  A 55-year-old a man on a bicycle "was struck by a vehicle near Folsom and Erie Street around 11:30am. Harold died 5 days later on March 24th. The circumstances of the collision are unclear, but Mr. Swaggard was found to be at fault for his death.” 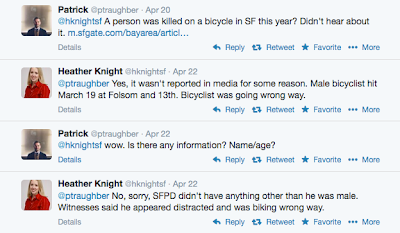 According to the SF Bike Coalition, there is no real time public record of bicycle and pedestrian fatalities on our streets and although the SFPD in the last year has begun to take a data driven approach to traffic enforcement, historically that hasn’t been the case. SFBC, as a key player in the making of safer streets, does track cycling deaths and has records dating back to 1996. They also had just heard about the March 19th collision and subsequent death, and had no further information at the time.

Not all deaths get media attention, but those that occur on our public roadways should. Streets are spaces that affect all of us and that are essential to the functioning of our urban environment and our lives. The fact that someone died while using our streets, at the hands of another person, in public, and no one even heard about it, is both tragic and wrong.

It is unsettling to know that SFPD may not have a protocol for releasing information surrounding pedestrian and bike fatalities. It is disturbing that a man on a bike was hit by a car and killed, during daylight hours, in a busy part of the city, and no details were released. It is even more troubling to think about what kind of investigation may have occurred, if any, to conclude that Swaggard was at fault for his own death. I can only assume this was a traumatic event for the driver of the car as well, but what happened to that driver? Were there any consequences? Did he/she drive home after the collision?

If you want to honor Harold Swaggard, who was killed over a month ago, join us on May 21st at 6pm for the San Francisco Ride of Silence, and make a statement for safer, more accountable streets for all users. Meet at 5pm at Sports Basement Bryant Street for a mixer, leave at 6pm for 7 mile awareness and memorial ride, to honor the lives of the many cyclists we have lost, including the one that died March 24th, off the proverbial radar.
documenté par Ramona Wheelright à 04:00

Most troubling is that people's response is to tell pedestrians and cyclists to be careful on the road. It is the responsibility of the most dangerous to protect the most vulnerable.