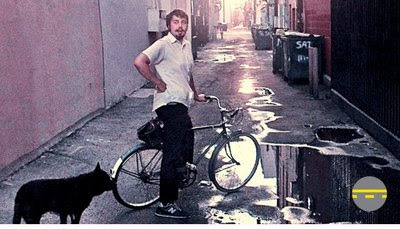 The recent issue of Good Magazine featured an article about the best bike cities in North America. To avoid stating the obvious (that Portland and SF top the list), the writer focused more on the lesser known bike bourgs like Austin and Montreal. Since they rated the cities on certain criteria, I thought I would dig up the stats on SF to see how we actually rated according to Good's standards. So here ya go (stats provided by the SFBC and the SFBMA):

6% of all trips in San Francisco are completed via bicycle (From the SFMTA: SF State of Cycling 2008)

The SFBMA and friends of generally throw 3-4 Alley cats a month.

I couldn't find stats on how many cyclists attend Critical Mass each month, so we'd be mighty pleased if any of our readers care to shed light on this matter.
documenté par Kristin Tieche à 08:55

Coming from one of the cities on the list, I strongly disagree! Not really, but I don't think the article was knocking Portland or SF. I don't think it was their goal to create a top ten list of the best cycle cities. Instead, I just saw it as useful information and seeing what other cities are doing to sport the bike. Plus, it always gets people riled up when you don't include their city.

As for measuring a cities bike culture, I don't know if in the future things like Critical Mass or Alley Cats will be a good measure for cities with growing(Hopefully) bike populations. It'll the the practical cyclist that grows the pie.

The article states in the first sentence that Portland and SF are obviously great biking cities.

I agree with you about the exclusion of certain obvious cities (like Vancouver for instance). Check out the comments section of the article. Geez!

So what do you think would be a more appropriate set of criteria then?

You talking to me!? Actually, I'll back a little bit away from my assertion that Critical and Alley aren't the best indicators of which cities are going to be the most successful at increasing bike culture. Critical Mass does create visiability and challenges the idea that the roads are for cars only. But besides the people involved in Alley Cats, I don't know how that is going to grow the wider bike culture?

What are good indicators not mentioned in the article? What are they doing to encourage more people to get on bike? Velib? Kids programs? How much push is there for better bike infrastructure? Is the city government for it? State?

And the most important criteria? How many Voguette's per capita? I'm guessing SF is way ahead there. How will we ever gain parity with all the talent they have? ;)

I , for one, am just happy there are other cities to highlight! It would be horrible if SF had the best infrastructure in N. America, and no one else had any.

Hey! Now we're talkin! I think we should do a voguette and vogueur count one of these days. And kids too! And senior citizens! The day my mom thinks it's safe and fun to ride her bike down Market Street will be a great day in SF.

And thanks for all the positivity Adrienne and Meli!!!

Interpret the article as you will... at least it's got people talking about cycling in cities!

And, if it wasn't for so-called "fringe" groups and demonstrations, we wouldn't be where we are now. Maybe SF would look more like downtown LA.