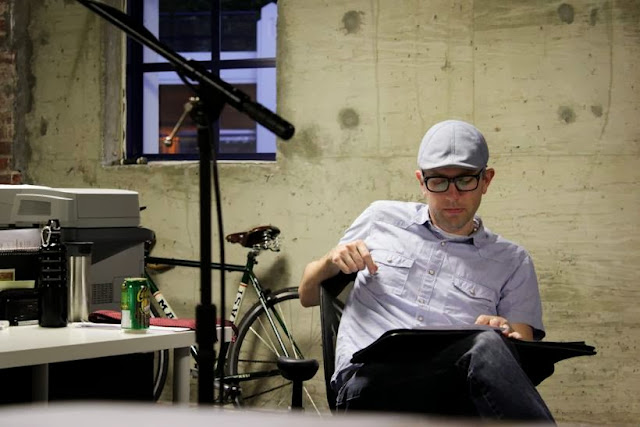 Raison d'être: Documenting the mainstreaming of bicycle culture through words, photos, and film Hometown: Vancouver, BC Neighborhood: Commercial Drive Favorite city to ride a bike in in the world: Montreal. On a BIXI. In the summertime. Je t'adore! Helmet or no helmet: I feel fortunate enough to live in a city where I can get almost anywhere via traffic-calmed bikeway, designated cycle track, or separated seawall. So I feel perfectly safe riding without a helmet. 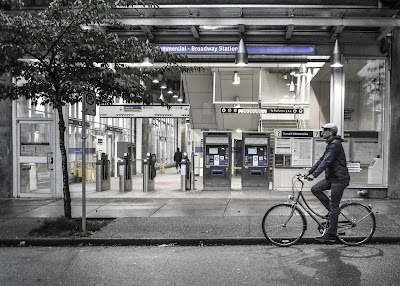 Type of bike: Linus Dutchi 3 Describe what you like best about your bike: The Dutch-style frame allows me to ride in an upright position, with a straight back, and very little weight on my forearms, wrists, and hands. It's an incredibly comfortable, practical, and enjoyable way to make my slow travels around town. Describe your personal style: I ride in whatever I happen to be wearing that day: for work, it's typically a dress shirt and slacks. I'll throw on a wool coat in the winter, along with a flat cap, scarf, and gloves. My morning routine and wardrobe selection do not depend on the mode of transport I happen to be choosing that day; whether it be foot, bicycle, bus, train or automobile. 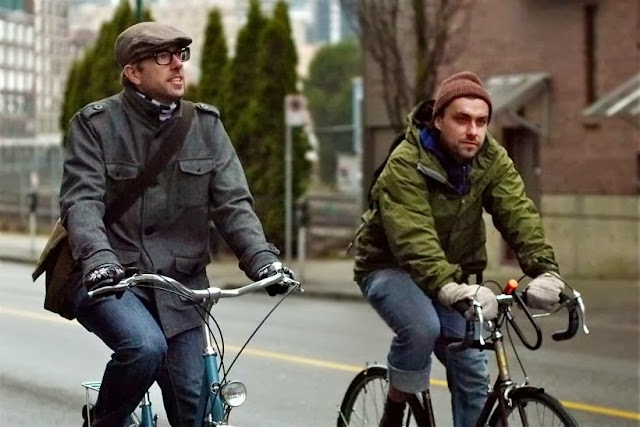 Favorite accessory when riding: I have a small, battery powered speaker that attaches to my iPhone and straps onto my handlebars for longer rides. You can't beat cruising the seawall with the kids in the summertime, music blasting, and the four of us singing along! Favorite time and/or place to ride: The seawall in the early morning or late evening. At over 30 kilometres of car-free, waterfront goodness, it really is the gem of Vancouver. At that time of day, it's essentially deserted, with the mountains, ocean, and glass towers on display for us to soak up. Tell me about riding around with your kids/family: We sold our car almost four years ago, and our family now makes the majority of our trips via walking, cycling, bus or train. We have evolved from a double-wide trailer, to a trail-a-bike, to a point now where both of the kids (ages four and seven) are able to ride on their own two wheels from one side of the city to the other. It has been amazing to watch the sense of joy, achievement, and independence as their skill levels increase, and they begin to learn the streets, neighbourhoods and landmarks of Vancouver like the backs of their hands! Tell me a funny story that happened to you when you were riding your bike: I have the funniest conversations while riding side-by-side with my children. Whether it's their innocent and unfiltered observations of the buildings and streets around them, or whatever strange idea happens to pop into their head that day, they never cease to amaze and entertain me. In the last couple of weeks, for example, my son has told me that "Cars are stupid", "Riding a bike makes his brain feel good", and people on the Skytrain should be called "Track pedestrians". Tell me about how you got involved with Vancouver Cycle Chic and your message: Despite a reasonably safe and connected bike network, the culture in Vancouver is still quite militant: with high-viz vests, gore-tex, and helmets very visible on the streets. Even our local government and bike advocacy groups are guilty of dangerizing, politicizing, and overcomplicating the act of citizen cycling. I got involved with Vancouver Cycle Chic because very few people were presenting an alternate vision: that cycling is stylish, safe, simple, and incredibly fun. 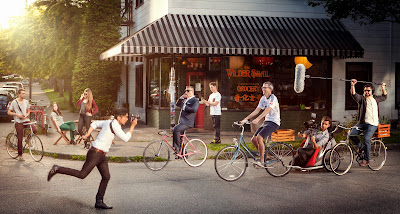 Tell me about Cycle Chic Films and the speaking tour you've been doing: David and I decided to expand the photo blog into the world of film after seeing the "Cycling With" film series out of Dublin. After a couple of (failed) attempts, we managed to get our method, style, crew and equipment together in a suitable manner. We completed four short films in the summer, and will have two new ones ready before Christmas. Our intention was to highlight the diversity, creativity, and humanity of two-wheeled transport in Vancouver, and inspire others to consider giving it a try. I have also been presenting the films to city officials, advocacy groups, and film festivals across North America, and talking about promoting cycling more effectively. One of the films: ‘Heart and Soul’, was recently awarded ‘Best Bicycle Short Film’ at the New Urbanism Film Festival in Los Angeles. 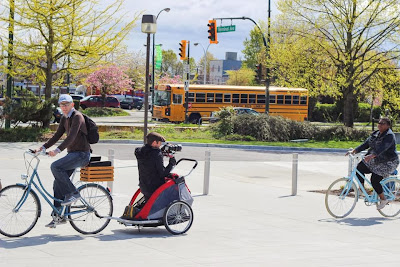 Vélo Vogue tip of the day: Dress for the destination. Not the journey. If you're in San Francisco on December 21st, come meet Chris at Huckleberry Bicycles, have a drink and check out some of his short films. Photos courtesy of Chris Bruntlett.
documenté par Kristin Tieche à 20:34