Chris Bruntlett Is a Criminal, according to Vancouver's Mandatory Helmet Law

Chris Bruntlett, blogger, writer, bike advocate from Vancouver, B.C. has some insight regarding the effectiveness of a mandatory helmet law for cyclists, as is currently proposed in California. We can learn from the failure of this law in Vancouver. This article first appeared in Hush Magazine on August 7, 2012. Please note: statistics cited may be outdated. Take it away, Chris. “When it comes to the big helmet debate, I believe in choice. Much like many other things in life, such as; smoking, drinking, eating fast food, and having unprotected sex. All of which affect our health care system far more than riding your bike around the seawall without a hideous mushroom cap on your dome. Are we going to make it the law to wear a condom or give out tickets to fat people? I am not opposed to wearing helmets, especially for children, and if one often takes long rides in traffic or along the highway, but for a leisurely ride around Vancouver? I choose to not wear one, and I think people should decide what’s right for them, like most places around the world.” -Mimi Lauzon, Bicycle Babes 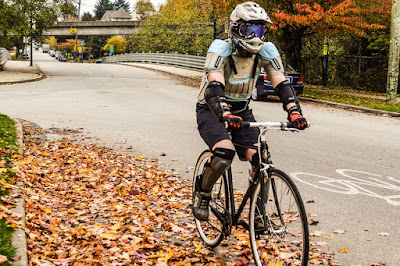 I have a confession to make: I consciously and blatantly break the law on a daily basis. Every morning, I kiss my wife and children goodbye, and ride my bicycle slowly along a 5-kilometre stretch of protected bikeway to my office, where I work as a Residential Designer. It is a simple act. One that should be encouraged and celebrated, as it is in 99% of the world’s great cities. But rather, because I choose to do this without a piece of Styrofoam on my head, I am labeled a criminal, and face being charged by the Vancouver Police Department under Section 184 of the Motor Vehicle Act (as I have twice). This despite the fact I am not riding a Motor Vehicle, that I feel perfectly safe riding the city’s plentiful bike lanes, that I am statistically safer than a pedestrian crossing the street or even a driver sitting into a car, and that my choice of transport is far more economically and environmentally beneficial to the city. When British Columbia first passed its adult bicycle helmet law in 1995, it was widely accepted as a sensible initiative to promote and increase road safety. The City of Vancouver followed suit shortly thereafter, passing a by-law that made it illegal to ride on city paths and seawalls without a helmet, under punishment of a $100 fine. Now, seventeen years later, it is undeniable these laws have not resulted in any of the benefits that were promised. They have not saved lives. They have not reduced healthcare costs. They have not increased road safety. It is therefore not surprising that only a handful of jurisdictions (BC followed Australia and New Zealand; the Maritime provinces followed us; then nothing) have since instituted such laws, while the rest of the world has recognized them for what they are: a complete disaster. The most significant impact of criminalizing cycling without a helmet is the simple fact that the majority of people won’t bother. In particular, short, slow, utilitarian pedestrian-like bicycle trips to the grocery store or restaurant become a rarity. In a province facing the growing healthcare costs of 1.5 million obese or overweight people, this is of grave concern: especially when it is abundantly clear that the health benefits of cycling far outweigh the risks. Almost every study on the impact of mandatory helmet laws show a 30%-50% decrease in cycling rates, and up to 80% in some demographic groups, such as young females. The cost of this inactivity to society, in both lives and dollars, is monumental. It has been estimated that New Zealand’s helmet law contributes to 53 premature deaths per year, while Australia’s costs the taxpayer around $301-million in healthcare expenses annually. Bike-share systems are another area where mandatory helmet laws become extremely problematic. Since the Vélib’ launched in Paris five years ago, the City of Vancouver has been studying the idea of a bike-share of our own. The lengthy delay has been down to one factor: how do you force people to wear helmets for a spontaneous, short trip on a shared bicycle? Meanwhile, over 300 cities around the world have passed us by, including such cycling hotbeds as Omaha, Houston, and Kansas City. Only three have attempted to do so under a helmet law: Melbourne, Brisbane, and Auckland, all of which were colossal failures. Vancouver tentatively plans to launch a system in spring of 2013, which will be significantly smaller than its Montreal and Toronto counterparts, and (laughably) includes helmet-dispensing and sanitizing machines. All of this notwithstanding the fact bike-share programs have proven to be incredibly safe; London, with far fewer traffic-calmed streets than Vancouver, hasn’t experienced a single serious injury after 4.5 million trips. Unfortunately, neither the BC Liberals nor the NDP want to revisit this law, which also remains popular amongst the motoring majority: drivers who are freely allowed to smoke, drink, and eat as much fast food as they want, with no thought of the healthcare costs they impose. Even more disappointing has been the lack of leadership from Vancouver City Council, with Mayor Robertson and Councilor Deal both calling the law “appropriate”, and insisting the long-delayed bike-share program will proceed without any exemption. However, there is a small but growing number of local activists who are speaking out against the law, calling themselves “The Church of Sit-Up Cycling” (in reference to one exemption from the BC helmet law: “conflict with an essential religious practice”) and launching a call to action: http://www.helmetchoice.ca. I stand proudly with the “Church”: the adult helmet law is a direct contradiction to our city’s goal of becoming the “World’s Greenest” in eight short years. It’s time to abandon the idea of helmet regulation, and try something new: increasing cycling safety through numbers and infrastructure, as they do in Copenhagen, Amsterdam, Tokyo, Montreal, and New York City. Then, and only then, will the bicycle stand a chance of becoming a viable and widely accepted mode of transportation in Vancouver. I, for one, can’t wait. All photos and words by Chris Bruntlett, unless otherwise noted.
documenté par Kristin Tieche à 08:30

Bravo! I hope more people in Vancouver and throughout BC will challenge this counterproductive and victim-blaming law.

At least one of those photos is here in Montréal, along the Claire Morissette cycle path (mostly along De Maisonneuve boulevard).

Anyone who thinks MHL is a good idea has not ridden a bike to the shops.

I can imagine Vancouver becoming the top bike city in North America. The only thing holding them back is the Helmet Law. It's such a wonderful, mellow place. Too bad they got zapped with the 80's-90's safety bug and enacted such a short-sighted law.