it takes a chainsaw

I returned two days ago from my month-long adventure in Brazil, my mind filled with memories, my skin still itching from sunburn, the taste of tropical fruits still on my palate, the crashing of waves in my ears, along with the roar of traffic congestion and honking horns.

When one mentions the word Brazil, the image of a pretty girl in a thong bikini strolling Ipanema usually comes to mind, and yes, there were/are many a scantily clad bunda to be seen. But I have decided to begin my reflections upon my bicycle adventures in Brazil with this striking image of an urban cyclist in Curitiba. A bit scary perhaps? Why is this man with a chainsaw chosen to represent Brazilian urban cycling on Vélo Vogue? What is fashionable about him?

Because in a nation where car sales are at a record high and predicted to only to increase in 2010, where motorists don't stop for red lights for fear of being carjacked, where it is unsafe to walk three blocks along city streets at night, where it is unsafe to carry a purse, where it is unsafe to wear jewelry, where riding a bicycle in the city is considered not only marginal but insane, the most fitting image to represent the state of cycling in Brazil is one of a warrior who is fighting for his freedom to ride by any means necessary. A bici-guerrilla arming himself to protect a citizen's right to move freely and in peace.

To write about fashion and what men and women are wearing (or not wearing) on their bicycles in Brazilian cities seems downright silly to me. Instead, I chose to tell you about the urban bike trailblazers I am honored to not only to have met, but to have shared bike lanes with, or the lack of bike lanes - many a bike-brother and sister who led me through city streets, along sidewalks, in bus lanes and even [SIM!] on designated bike lanes!

I can't begin to tell you how impressed I am with the tenacity, passion and strength of these pioneers dedicated to a vision of a more liveable city. My experience cycling in Brazil will make me appreciate and celebrate the simple things about biking in SF that I have often taken for granted as I drop my purse in my basket and head through the Panhandle to Market Street on my daily commute to work in the morning and back at night. Or when I ride to the Mission on a Friday night and lock my bike up to a parking meter in front of a bar. Or as I wait in the freshly painted bike box on the Wiggle, edging into the intersection before the light changes. Or as our SFPD escorts us in a Critical Mass.

And because I don't want to leave you all hanging, and because I love you, here are those girls from Ipanema. 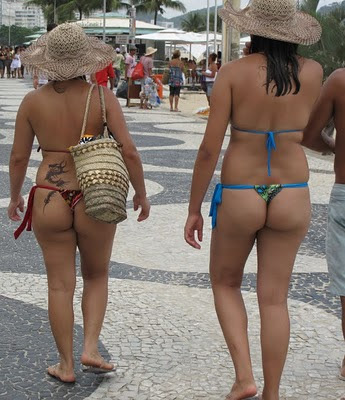 that picture is just perfect!
Last week a boy almost stole my puma bag here in sao paulo!
It's really a shame for us brazilians toi have our country known by those things. It's sad, but it's true!