Everyone's got lists - top ten vacation spots, top ten best albums of all-time, top ten SF restaurants, etc. Each list is subject to the writer's opinions and tastes, and there always seem to be gems that are always overlooked, always left off the list.

That being said, people LOVE lists. Those "Top Ten" shows on television always seem to make the best ratings.

THAT being said, I still don't know what to think of lists. BUT - when Vélo Vogue makes the list of top 50 influential bike blogs, it certainly feels nice to be recognized. Extanz's rating system seems arbitrary to me, though the top two or three blogs logically seem to be in the right place. The rest of his ranking system doesn't make too much sense. Perhaps the list would better be represented by an amorphous blob of great bike blogs around the world.

So, thanks again for including me on your list, Yann.

AND NOW - please vote for Vélo Vogue so we can be included on another list. CBS Local has nominated Vélo Vogue as one of SF Bay's most valuable lifestyle blogs. Here's the link to vote, and please do so early (before Sep. 9) and OFTEN! 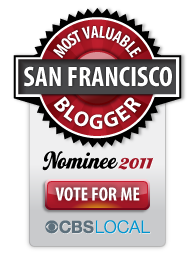 Merci beaucoup to all our fabulous readers and RIDE ON!!!
documenté par Kristin Tieche à 00:05

Congrats on the nom! I'm voting for you. Keep up the great work, KT! Love your blog.

Congratulations on the 50 Most. I tune in regularly for a good SF fix.