Mother Can You Hear Me?

Installment 2 of my personal perspective on the silly things people do on their bicycles that can make things hard for everyone.

Not long ago, I was riding along Valencia St. when I noticed the rider just ahead of me was a woman I know. She was about 50 feet ahead of me, so I sped up and called out to her. She didn't hear me, so I picked up the pace a bit and called again. Nothing. I gave her my New York taxi yell (it is quite impressive, you should hear it). Nothing. Finally I caught up to her and passed to the left and said "hi!". She just about jumped out of her skin and nearly crashed.

"Don't sneak up on people like that!' she yelled at me.

"I didn't! I have been yelling your name for half a block!"

"I have my earbuds in. I can't hear anything."

"Then why do you wear them?"

"Well I can hear stuff, just not you." Not my friend. Just someone with earbuds.

And there you have the issue that we will address in today's "How To Not Ride Really Badly" lesson. If you can't hear me hollering 50 feet away, you can't hear anything. This guy above was a really nice guy I ran into one Bike To Work Day. His music was so loud I could hear it on my bicycle over the traffic of Market Street. He was quite startled by my presence, too. Entirely because he couldn't hear me next to him. I am pretty sure he was lip reading when I took this picture. Just before I took this picture, this woman was passed by a frustrated bus driver. I am not convinced she heard the bus next to her as she flinched and swerved as it passed her. I am not sure how anyone would be comfortable not knowing a 60 foot long bus weighing 31,500 lbs (unloaded!!) with a frustrated driver who is late is coming up behind them. In California, wearing headphones or earbuds in both ears, while driving or riding a bicycle is illegal (CVC 27400). Over an above that, it is stupid. When you can not hear anything other than Lady Gaga or This American Life it means you lose the one sense that can warn you ahead of time there is trouble. How many times have I not hit someone passing me on the right only because I heard their squeaky chain coming up behind? People use the example of the deaf being able to do things without hearing. It is a silly example. Someone who is deaf has adapted to their lack of hearing and has found ways to make sure they know what is going on around them. Those who are totally into the Tupac blaring in their heads... not so much. They are distracted by the very engaging music and usually forget that the rest of the world is still out there. The woman above is a prime example- she didn't hear the car in cross traffic running the red light when it was time for us to go. It could have been really ugly. While there is the argument that driver's should always assume that others can't hear them, or that they may hit a vulnerable road user, I don't think that absolves road users from paying attention to their own, and others safety. It is illegal to drive with headphones in Portugal, Spain, Germany, but I could not easily find information about its legality on a bicycle. The Dutch ask us not to when we ride there- 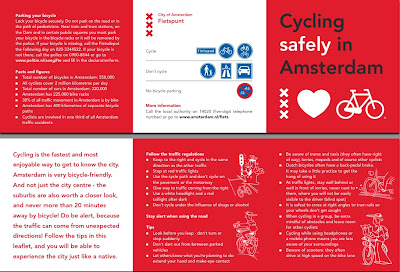 big, readable one here
James and I were talking about the issue of hearing while riding the other day. We have both taken up motorcycle riding again, after many years away. We had both noticed the same thing- we were each disturbed by our inability to hear the cars around us due to our full face helmets, road noise and wind. We have become so accustomed to being able to hear everything around us while bicycle riding that we were disturbed by our inability to do this on the motorcycle. Neither of us realized just how much we had come to depend on our hearing while riding around and neither of us felt safe when it was taken away. So, if you want music on your ride, maybe you should just take the band along with you. Or sound up your bicycle and share the love! Hendrix is so much better when you can hear what is going on around you!

I don't like wearing headphones when I go for run - and I'm rarely on the road! But our ears are wonderful things - they let us know what's going on around us - I know when the buses are going to overtake me (and come very close to me), I can hear faster riders coming up thanks to their chains and listening allows us to avoid accidents such as this:
http://www.theage.com.au/victoria/train-crossing-victim-was-listening-to-music-20111010-1lhl3.html

Everytime I see a cyclist with their iPod or similar, I have to shake my head.

For the record, I agree with you.

thank you!! i tell ppl this all time, not to ride with ear buds in. its dangerous for them and everyone else around them. i have had this conversation a couple of times in the past two weeks with two different ppl. one of the best things about city riding is the city. why block it out!!

I agree with your points on earphones and riding. I recently purchased a new earphone to listen to music while riding or walking that leaves one ear open. This is from onegoodearbud.com, where they have a variety of different types of earphones that have both stereo channels running to one earphone.

I use this setup on my commute along mostly bike trail. I wear it on the right ear so the "traffic-side" ear is open. I do not have my music loud. I have ridden in traffic and was able to really tell what was going on around me.

It has made the boring parts of my ride much nicer. I even ran the music when I was on a mountain bike ride up a steep switchback fireroad where I was pushing the bike as it was too steep (1000 vert. ft. in 1.7 miles). I was in a redwood forest and the music was the instrumental soundtrack from the movie Lord of the Rings: Fellowship of the Ring. Certainly good mood music but I was still able to hear the squirrels and birds around me.

Use the right equipment in the right way and earphones are not all that bad.

Can I download the Mozart variations on the theme from iTunes?

the worse is when people are changing the music on their ipod/phone! i tried listening with one earbud, but changes from a busy street to a quiet street hurt my ear (i guess i could set the volume to quiet street). also the wind blocks out any music set at a reasonable volume. and yes, i do like using my hearing to know when vehicles/cyclists are getting close. so yeah, pay attention to your surroundings road users!!

Thanks for sharing this. Riding with headphones is also really, really bad for your your eardrums as well (particularly with shitty ipod ear buds where you really have to crank up the music to isolate external sounds).