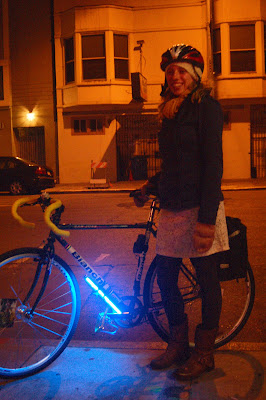 Grace and her posse were cruising the Lower Haight last Friday when I ran into them after my final-final at Molotov's. She and her friends can be seen riding around most weekend nights, equipped with a party bike that not only glows in the dark, but plays tunes. 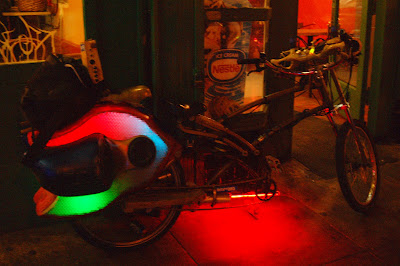 When we convened for a stop-and-chat in front of Mythic Pizza, I learned that her friends are associated with Rock the Bike, which reminded me that I had once seen these glowsticks for bikes on their website (and coveted them). Grace is the producer of the Bicycle Film Festival and had one of its postcards intertwined in her spokes. The film festival is on this weekend in San Francisco, and it looks like there are some cool films, so check it out!

Grace and her glowing friends represent that creative spirit that is synonymous with San Francisco bike culture, bringing awareness of the joy of cycling with style and inventiveness. Hurrah!
documenté par Kristin Tieche à 12:12

Hi~I'm a friend of Libby's--she refered me to this fantastic blog. Thank you for posting about the Down Low Glow lights--I'm ordering a set right now for some sweet nighttime rides...Thanks a million!!

Cool, Gina! I'm glad you're enjoying the blog. Does this mean that you'll be out vogue-ing in Hollywood? Send us a pic!