We are all still reeling from the election results of Tuesday night. It's about time we had a face representing our nation that we can all truly stand behind and be proud of, someone who truly represents us as we are: a diverse, tolerant people with a conscience and a vision for a better future.

I was Satan Palin for Halloween this year, and so for Critical Mass, I attached an American Flag to my basket for the ride. At the end of the night, as I took off my eyeglasses and power red blazer and my hair out of a bun, I decided to leave the flag on the bike. Many people told me during the Mass that Palin probably thought cycling was un-American. They might be right about her, so I've decided to leave the flag on my bike. I'm taking back the flag.

On Election Day, I crossed paths with this woman who apparently feels the same way. She was dropping library books off at the Main Library. 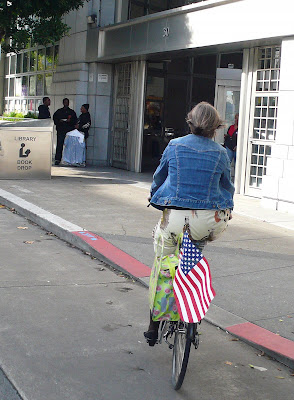 Meet Cheryl, the Board President of San Francisco's Livable City. She's got a great look with her Native American print skirt with tights. We stopped and chatted for a few minutes, discussing why we ride with Old Glory unfurling behind us. 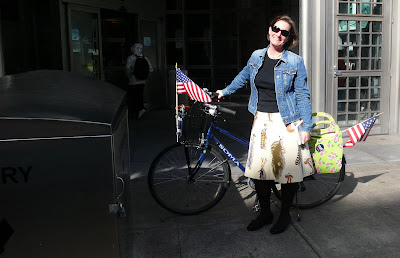 Our reasons are straightforward. We are real Americans, and it's about time we took back our flag and our country.
documenté par Kristin Tieche à 08:56

You Go!
I like your thinking and I will add a flag to my bike - proudly.

Yeah for flags on bikes! It's really fun to see the flag on the front of my bike flutter in the wind as I zip downhill.

fistaCoincidentally, as I was leaving work this afternoon I saw a girl on a bike with a nice size American Flag on her bike riding down Market Street towards the Castro.
(I tried to snap a picture but due to dusk being so early my flash wasn't strong enough) . I couldn't help but ponder if she was a follower of this blog...

That could have been me if it was Friday...

Cool if it was!
Just emailed you the pic.