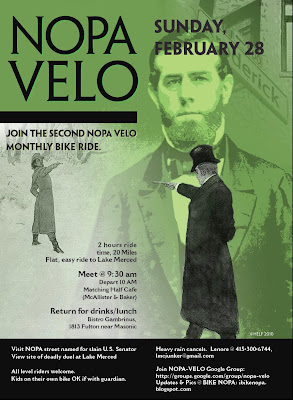 NOPA VELO, the North Panhandle's much buzzed-about bicycling group for neighbors and friends, is geared up and ready for its second ride. Newcomers are definitely welcome.

On Sunday, February 28th NOPA VELO cyclists will meet at the Matching Half Cafe to get charged up and primed for the dastardly "Death-by-Duel" dash down the coast.

On the last day of February, VELO vibs spin their wheels in memory of the last days of David C. Broderick, the U.S. Senator from California who was shot and killed in a duel by a California Supreme Court Justice in 1859. Both Broderick and David S.Terry were Democrats, but they disagreed on abolition. Broderick was an anti-slavery advocate, and his one-time best friend Terry wanted to bring slavery into California. In the heat of arguments, they defamed each other's good name and then agreed to a duel near the shore of Lake Merced. Broderick's pistol fired prematurely, and Terry didn't wait for a second round. He shot and mortally wounded Broderick, who died three days later in a house at Fort Mason. The current resident reports that the house is haunted by the man who gave his name to a NOPA street.

After contemplating politicians who couldn't talk things through, NOPA VELO riders return by 12:30 pm for drinks and lunch at one of the North Panhandle's new restaurants, Bistro Gambrinus on Fulton near Masonic.

Heavy rain cancels; otherwise the ride is on.