those who love vélo take the train 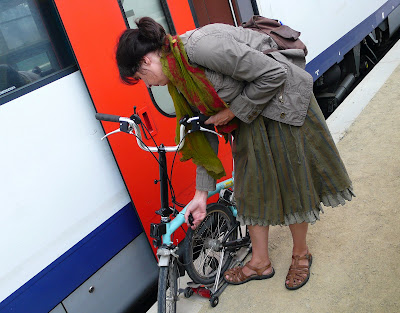 The closest I got to Amsterdam on my recent European trip was the town of Leuven, in Flanders (the Flemish speaking part of Belgium). It is immediately noticeable upon arrival in a Flemish town that you are no longer in Wallonie (the French speaking part of Belgium), with the Dutch cultural influence and the noticeable difference in the number of people on their bicycles. I don't understand why the Wallons are not as keen on cycling for transportation as the Flemish. (Maybe some of our European readers can explain here?)
This was the only photo I managed to grab while I was in Leuven. She was unfolding her bike when she exited the train, on her way to work or home, or somewhere else entirely. Either way, she looks formidable in that pleated olive green skirt and scarf.
documenté par Kristin Tieche à 09:20

I really don't know. But there's much I still don't understand of the immense Belgium cultural divide. I sure could say something about the socio-economic differences, but besides that I'm fiddlin' in the dark.
Not for nothing Belgium has been on the verge of a split up for years now.

Your comments make me laugh, because I think the Wallons associate themselves with the Wallons and no one else!!!

Will have to make it to Amsterdam next time. I love your blog.