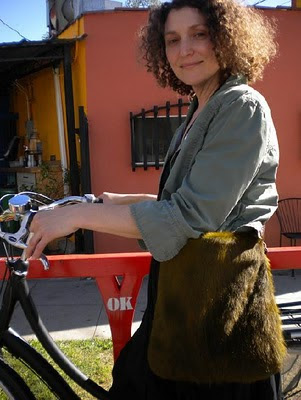 Car-free in Los Angeles since May 2008
Name: Christine Louise Berry

Favorite city to ride a bike in the world: I spent a summer doing a dance workshop on a farm in Hakshu with Min Tanaka, a famous Japanese Butoh dancer. People flew in from all over the world, and the only way to get around the farmland was by walking or biking. It was definitely the most free I’ve felt on a bike – small city, very little traffic, clean air and so many fellow two-wheelers. It’s also the only time I’ve ever fallen off a bike – but there were extenuating circumstances involving a monkey.

Helmet or no helmet: Combo. I think it’s important to wear a helmet – you only get one brain. I traded up for a more “stylish” helmet, but it’s still dorky... it has ear muffs. I will confess though that on a beautiful, sunny day, when I’m not going very far, it’s really hard to put it on.

Describe what you like best about your bike: With faster bikes, I had to think about what I wore. I nearly killed myself when a vintage sweater I had wrapped around my waist slipped off and threaded through the brakes, and boot-cut jeans would get caught in the gear wheel. It really felt dangerous. When I gave up my car, I knew I wanted a bike that would go with everything. So I chose a bike that replaces a car: it’s sturdy, visible, beautiful. The line of it is sweeping. It’s got this long stride. And the way the top bar slopes down -- it’s so f-ing elegant. It has a skirt guard and a hub-generated light that never needs batteries – everything is made to last. Ultimately, it’s just springy, really fun, and I never have to think twice about riding.

Describe your urban cycling experience: I think since childhood I have seen a bike as a way towards independence. It’s the first thing you can do when you’re a kid by yourself to get distance. I don’t like to go fast, and I don’t go too far, so by default biking keeps me local, integrated into my own neighborhood. By the nature of the way I ride I do all the things you’re supposed to do to be sustainable and have a tiny footprint: shop locally; be a part of your neighborhood; experience life in your community. When you have to walk or ride, it forces you into a different pace that I think people pay a lot of money for therapy and spa vacations, asking “How do I slow down?” Give up your car, and you automatically take in the sights, meet your neighbors. Riding my bike makes Los Angeles a small town. 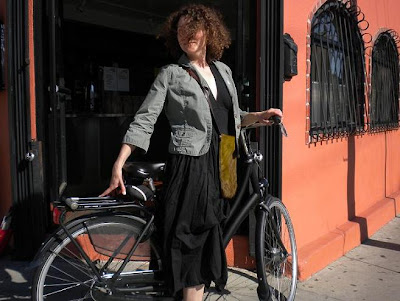 Favorite time and/or place to ride: After a big street festival ends, when the roads are still closed. For example, Gay Pride in West Hollywood. One time it had just ended, and I was going somewhere on my bike. No cars could go through the blockade, but I could. It was like having a free pass -- a mix of transgressing and a playtime.

Tell us a funny story about something that happened to you on your bike: So much of it is the day in, day out because as soon as you get out of your car in LA, you have a different experience of the city. It makes me feel young all the time – and free. Once though, I was coming home on one of my Schwinns, and this kid – he couldn’t have been more than about 18 – sidles up below me on his bmx-style bike. He gives me a wassup nod, smiles and all smooth-like he says: “So, you’re ridin’ your bike.” That’s got to be the best opener I’ve ever heard -- and he escorted me home! It’s great to be hit on by someone 1/2 your age. That alone should motivate more single women to pedal out.

Describe your personal style: I’ve always had an attraction to vintage, and I’ve been around long enough to remember when vintage used to be cheap. I was wearing slips as dresses long before they started making dresses that looked like slips. I guess that vintage love affair leads me to sort of a classic style – one that my family has unfortunately often described as the “homeless look.” I get a lot of mixed messages. Since giving up my car, I’m always on the lookout for the perfect pair of not-scary, non-orthopedic-looking shoes that can be worn all day. My first choice is always just to find cool things designed by locals at one of my neighborhood shops.

Favorite bike advocacy groups: I’m a member of the Los Angeles County Bicycle Coalition and a sometime-volunteer. In fact, I first discovered the Batavus Breukelen volunteering as a bike valet -- it was love at first site. I also recently joined the Adventure Cycling Association after a disastrous bike trip using nefarious Google bike directions. I try to do my part writing about car-free culture on a little blog that no one reads called SoCal Soft Pedal – the message is, well, soft, not a hard sell.

Vélo Vogue tip of the day: Moisturize your face before you go out on your bike, to keep the pollution out. Also, invest in racks, so you don’t have to carry stuff on your back. That hunched look ruins the elegant cycling line, and it’s bad for your spine.
documenté par Kristin Tieche à 07:38

Christine - Let me know if you need any help reporting the problem you had with Google Maps. Hopefully it is already fixed.

The ACA maps are nice and pretty reliable IF you are going along one of their routes. I work on the Google maps team and don't trust any map 100% ;-) OpenCycleMap and Google Maps are the most fun because they have wide coverage and are easy to fix.

this kid – he couldn’t have been more than about 18 – sidles up below me on his bmx-style bike. He gives me a wassup nod, smiles and all smooth-like he says: “So, you’re ridin’ your bike.”
I just had this exact same experience today, only the teenage kid was on a skateboard.

I too had a similar experience the other day at the train crossing! Very funny! Something in the air or what?

now her bikes been stolen