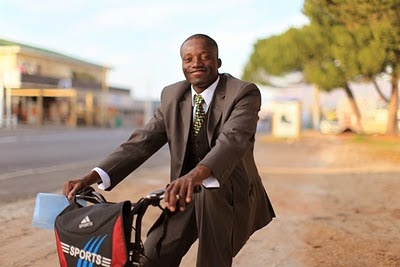 Last week Sunday I was on my way to Simonstown by bicycle - for a meeting and also to shoot a bit for the Bicycle Portraits project. I had just finished shooting a guy on a beautiful old racer I met along the way and we were just saying goodbye when John flew by on his BMX - in a suit! I threw my camera in my bag and jumped on my bike, waved a quick goodbye to Peter I just photographed and set off after this suited gentleman. But I had gotten a flat and my rear wheel had completely deflated while I was chatting to Peter! But I kept chasing - I had to meet this guy! I got him to stop reluctantly - he was on his way to church and he was running late! In the few minutes we had I took his portrait and he told me that he bought his bicycle only a few weeks earlier because of the train strikes we've been experiencing over the last weeks. His bicycle has helped him tremendously, and even if the trains start running again he won't be riding them any more. He's got his bike now, and he looks damn fine on it...

In South Africa we have no proper public transport infrastructure, and that which does exist is expensive and unsafe. We are also plagued with constant train and bus transport strikes, during which minibus taxi's often take advantage of their customers by charging them up to 3 times as much as usual. This is sad and frustrating, and puts a lot of strain on our fragile economy. Given all the benefits of commuting by bicycling - independence, fitness, cost-effectiveness, environmentally friendly - we would love to encourage the use of bicycles in South Africa amongst all social classes.

Bicycle Portraits will be a photographic book exploring contemporary South African bicycle commuter culture. Please visit http://kck.st/c09uOF and support us by pledging for a reward on our Kickstarter fundraising initiative page. For a pledge of $50 you are essentially pre-ordering a copy of the book. Please have a look! Only 10 days to go!

this is awesome! love their photography :D
all for global connectivity - great work Stan, keep it going!!

Hi,
I think your blogs great!!

Im Currently in the process of completing a brief for the boom in cycling fashion clothing. I wondered if you could help me out a bit?

I just wanted to find a few things out to help everyone in the future and to produce fashionable cycling clothing with easy access pockets and little things that you all need.

Please help me out and answer these couple of questions honestly and however the hell you want!!


Any more comments you think would help would be much appreciated.
Thankyou so much for your time and if it would be easier to email me with the answers then go ahead!