Hometown: Cleveland, aka “C-town” aka “Land of Cleves” aka “Mistake on the Lake” aka “Canada Minor”- did you know our river caught on fire once? No joke.
Current city/Neighborhood: Downtown San Jose, which I fondly refer to as “The Ho”

Favorite city to ride a bike in in the world: San Francisco, of course. Commuting by bike in San Francisco feels like some sort of bizarre carnival ride—if you combined a roller coaster, bumper cars, one of those car-racing video games from the 80s, and a workout video—that’s what riding a bike in SF feels like. I’m sure I’m missing a good descriptor or two, but that’s the best I can do for now.

Helmet or no helmet: Helmet all the way! Two helmets, if I could figure out how that would work (if anyone has any ideas let me know). Someone I know once said: “Sure, wearing a bike helmet doesn’t look very cool, but having your brains splattered on the pavement looks way less cool.” Type of bike: Right now I’m test riding one of our new Daily bikes—the silver step-thru version with rear rack and external gears. I also own a unicycle, which I’m afraid to ride, and a GT Aggressor 3.0, which was my first commuter bike. My tried-and-true whip, however, is my Specialized Dolce—covered in stickers with all of the gears swapped out for lower, more SF-friendly gear ratios, and a rear rack, of course. I lovingly refer to it as “Dolcenstein.” It looks so far removed from its original appearance that my coworkers here at Specialized don’t even recognize it as one of their own. Occasionally, someone here will ask me why I’m not riding a Specialized bike, and then I point to the chainstay where the name “Dolce” is still visible, and then they scratch their head and walk away in bewilderment. I love this bike. I’ve attached a picture of it from the Berkeley Urban Assault ride, where I found another woman who has also stickered the hell out of her Specialized bike. They are BFFs (Bike Friends Forever) 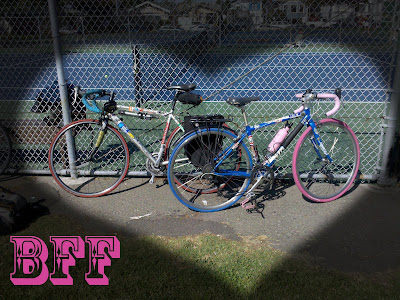 Describe what you like best about your bike: My bike is an extension of me. I’ve ridden Dolcenstein all around SF and the Bay Area. I’ve ridden many short tours on her as well, and for my 30th b-day a couple of years ago I rode her down the coast, from SF to Los Angeles, with only two panniers and some camping gear. It was amazing—just my bike and me. We go everywhere together. I love putting stickers on my bike, swapping out components, and installing the most obnoxious bar tape and tire colors I can find. My bike is like an ongoing art project—a self-portrait of sorts—but rideable. It displays both the beauty and chaos of my life. I love my bike.

Describe your urban cycling experience: Wow. Where to begin? Currently, I am getting to know San Jose, and Silicon Valley for that matter, by the seat of my bike, and with assistance from many different Bay Area public transit agencies. I’ve been down here for about a year, and before that I was a cyclist in SF for four years. I’m not going to lie, it’s a totally different beast down here in the South Bay, but there is a thriving fixie scene, of which I am not a part, though I admire it from afar, and appreciate the community that shops like IminusD have created where none existed before the fixed scene exploded. I did everything by bike in SF—I rode everywhere—rain or shine. I rarely took MUNI, and only used BART to get to the East Bay. I was also highly involved with the San Francisco Bicycle Coalition (HOLLA!) as a volunteer on their membership committee. Actually, if you are reading this and are not a member yet, you should stop everything and JOIN
documenté par Kristin Tieche à 07:31

I think Jessica might be able to fulfill her wish of wearing two bicycle helmets by simply wearing one motorcycle helmet.

Uh, Peculiar is NOT funny, though funny May, indeed, be peculiar.