Eye on the Bike

Mainstream media is finally paying attention to the whole bike thang! Get ready for Eye on the Bay's Bike Episode in late October.

For one segment, I took Host Liam Mayclem on a "bike-friendly" tour of SF that began with getting him on a sexy Retrovelo bike from My Dutch Bike. Thanks, Soraya! Then I fed him to the lions. Straight down Market Street.
Taxis! Busses! Streetcars! Oh My! Liam stopped to text me: Bring It On. They attached a helmet cam to my head to get a bike-eye view of our ride. First stop: Mojo Bicycle Cafe to refuel and show off our bikes on their lovely terrace. Next up - Nooworks to try on some new threads! Then Liam got to meet Vélo VIP Renée Rivera, Acting Executive Director of the SFBC to get the inside scoop on the new bike lanes. For this interview, I hauled Sean the cameraman around in a Bakfiets from My Dutch Bike. Piece of cake! 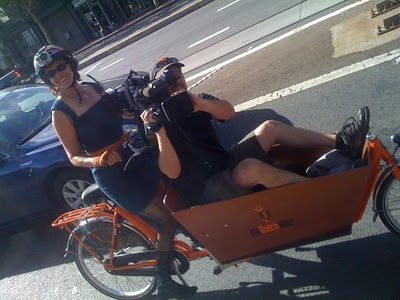 I'm too sexy for my bike. Riding the Bakfiets is quite easy, even with a heavy front load. I had no problem maneuvering or coming to a stop when hauling Sean around, though I saved the video for when he and the $5,000 camera were not in the front compartment. Check it!


Our last stop - THE BALLGAME! Even though Liam totally blew it with his color selection, I still let him sit next to me. Giants kicked LA's butt and are still leading the West! Awesome. Look forward to seeing it!

We gonna knock it outta the park just like Uribe!

You've got that right.....You are too sexy for your bike!